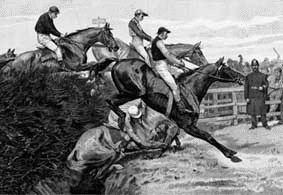 The Grand National is held each spring for over 160 years and has a massive worldwide audience. It is the most famous and attractive race of the year on the British horse racing calendar.

The Grand National is a Steeplechase competition requiring horse and jockey to successfully complete two circuits of a 2.25 mile completing the race with a 494 yard run.

The course has sixteen obstacles each of which must be negotiated twice by the contestants with the exception of the Chair and the Water Jump which must be completed the first time around the course only.

The race which is run over four and a half miles, includes famous fences such as “Becher’s Brook”, “The Canal Turn”, “The Chair” and “Valentine’s Brook” which have provided some long lasting memories over the years and each have their own story to tell.

A maximum of 40 horses are allowed to compete each year all needing to jump 30 fences in total to finish the race with 14 of those jumped twice and two fences “The Chair” which is the tallest and broadest fence at 5 feet 2 inches and “The Water Jump” each being jumped once going into the final sprint of just under 500 yards to that illustrious winning post.

The fences in the order set out on the Aintree race course are as follows:

The best loved horse race on the British calendar, first official Grand National was held at Aintree in 1839, although the first race at Aintree took place three years earlier.

The Grand National was founded by William Lynn who, during the early Nineteenth Century, was the innkeeper of the Waterloo Hotel in Liverpool.

After sponsoring the Waterloo Cup, a successful hare coursing event, Lynn conceived the idea of hiring some land on which to hold race meetings and, in 1829, he began leasing Aintree racecourse.

Horse racing took place at Aintree from 1829 until 1835 with three meetings being held each year. In 1836 Lynn took his plans one step further when he initiated the very first Steeplechase (a race course with obstacles) at Aintree held on 29th February 1836, which was famously won by The Duke and his rider, Captain Becher.

The Aintree Steeplechase was a huge success and continued for the next two years although the race was moved to Maghull, another racecourse in Liverpool.

In 1839 the Steeplechase was moved back to Aintree and dubbed the Grand Liverpool Steeplechase, now regarded as the very first Grand National.

The 1839 Steeplechase was won by Lottery with the renowned rider Captain Becher falling into a brook at the sixth obstacle, now known as Becher’s Fence.

Since 1839 the Grand National has been raced every year except during the Second World War when it was suspended for four years. During the First World War the race continued but was held at Gatwick (now the airport) instead of Aintree.

The race was introduced to radio listeners in 1927 and in 1960 the Grand National was televised for the first time with its popularity continuing to increase ever since.

There are many horses to have gone down in history at the Grand National but below are a few of the most famous:

Famed for negotiating each obstacle with extreme dexterity Red Rum was an astounding 12 years old when he won his final race.

He retired in 1978 after getting a hairline fracture during a pre-National warm-up day and, after a celebrity career lasting until 1995, Red Rum’s life ended and he was buried by the winning post on the Aintree course.

Aldanti – Racing to victory in the Grand National of 1979, Aldanti and his jockey Bob Champion went down in history as a pair who won the race against all the odds.

Diagnosed of cancer in 1979, Champion was given just months to live whilst Aldanti had almost been retired from racing with serious leg trouble. After their unlikely win, Champion made a full recovery and Aldanti lived until the age of 27, dying in March 1977.

The inspirational story of the determined horse and jockey went on to inspire the 1983 film Champions, which starred John Hurt as Bob Champion.

Devon Lock – Defeated by E.S.B in 1956, Devon Lock is best remembered for his inexplicable tumble just before the finish line.

On target for a good victory, Devon Lock mysteriously leaped into the air just 50 yards from the end of the course, falling and unseating his jockey, Dick Francis, and losing the pair the race, after which the Queen Mother famously said “that’s racing”.

It is thought that the horse may have made the sudden leap after getting leg cramps or that he may have thought a shadow cast by the final water jump was another obstacle.

Since the incident, Dick Francis has gone on to write a series of thrillers inspired by the mysterious nature of the race.

If you decide to bet on Horse Racing, visit our Free Bets page. 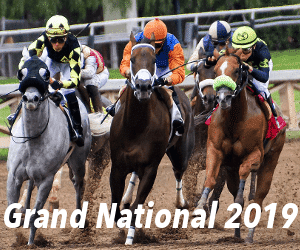 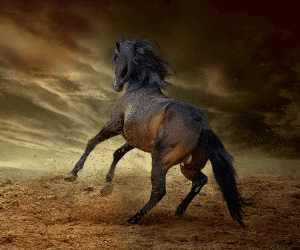 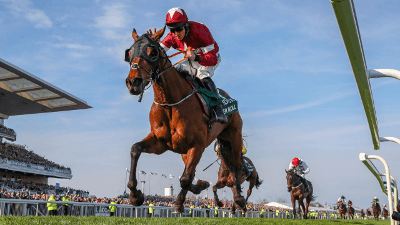